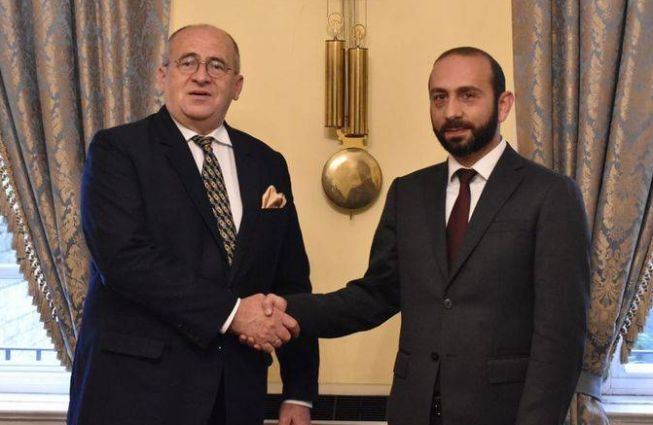 On September 22, 2021, in the framework of the 76th Session of the UN General Assembly, Minister of Foreign Affairs of Armenia Ararat Mirzoyan held a meeting with Minister of Foreign Affairs of Poland Zbigniew Rau.
The Ministers touched upon a number of issues of bilateral and multilateral agenda, expressing mutual readiness to undertake practical steps for strengthening the mutually beneficial cooperation.
Within the framework of Armenia-EU cooperation, the Ministers discussed issues concerning the implementation process of Armenia-EU Comprehensive and Enhanced Partnership Agreement, as well as issues on cooperation of the Eastern Partnership based on the common values.
The sides exchanged views on the forthcoming OSCE Chairmanship of Poland, as well as on the effective cooperation and common priorities in that field. Minister Rau briefed the general priorities of the Presidency of Poland.
Touching upon the issues of regional security and stability, Minister Ararat Mirzoyan presented the steps being undertaken to eliminate the consequences of the aggression unleashed by Azerbaijan with the direct involvement of Turkey, specifically emphasizing the imperative for the repatriation of Armenian prisoners of war and captured civilians held in Azerbaijan.
Minister Mirzoyan also drew his counterpart's attention to the preservation of the Armenian historical and cultural heritage of Artsakh and the involvement of relevant international organizations in that issue.
Both sides expressed confidence that it is necessary to resume the peace process of the Nagorno-Karabakh conflict within the framework of the OSCE Minsk Group Co-Chairmanship.
share:
MFA RA
official website
Dual citizenship
Electronic visa
Visa applications