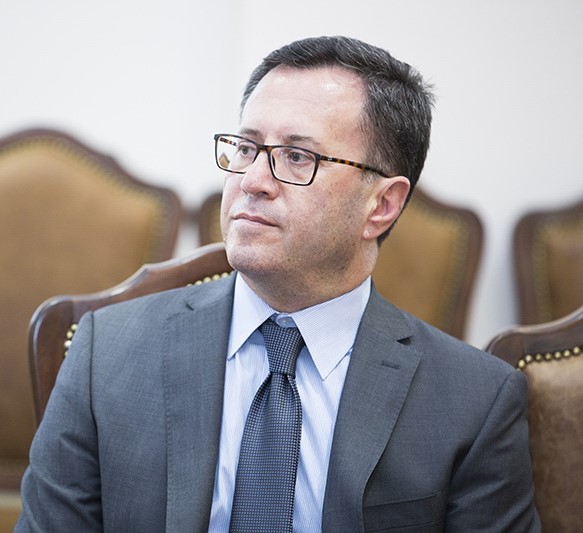 Mr. Samvel Mkrtchian, prior to his appointment by the Presidential decree in November 2018 as Ambassador of Armenia to Poland, was serving as Armenia’s Ambassador to Lebanon since 2016.

Prior to that position, he was the Director for Arms Control and International Security Department of the MFA starting December 2010. Department has been covering issues related to the OSCE, NATO, Bilateral Political Military Cooperation, Peacekeeping, Cyber Security, Export Control and Non-Proliferation of Weapons of Mass Destruction.

From 2004 to 2010 he was the Ambassador, Head of the Mission of the Republic of Armenia to NATO. Mr. Mkrtchian was also assigned as non-resident Permanent Representative to the Organisation for Prohibition of Chemical Weapons from 2006 to 2010. S. Mkrtchian negotiated the first Armenia-NATO Individual Partnership Action Plan, which entered implementation phase in 2006.

Mr. Mkrtchian was the Director of Europe Department of the Ministry of Foreign Affairs from 2000 to 2004. Relations with the European Union, Council of Europe, the OSCE and bilateral cooperation with European countries were in the remit of the Department.

From 1994 to 2000 he served as the Deputy Head of Armenian Delegation to the OSCE, Alternate Permanent Representative of Armenia to UNOV, UNIDO and IAEA. He was also performing in the function of Charge d’Affairs to Austria, Hungary, the Czech Republic and Slovakia for the period of 1997-1998.

Mr. Mkrtchian was the Armenian negotiator of the Adapted Conventional Armed Forces in Europe (CFE) Treaty and Vienna Document from 1996 to 1999 while posted in Vienna.

He was a member of Armenian negotiation team for the settlement of the Nagorno Karabagh conflict in the framework of the OSCE Minsk Group from 1995 to 1997.

Ambassador S. Mkrtchian was the Special representative (Sherpa) of the President of Armenia and in that capacity was involved in preparatory meetings and negotiations of the Seoul (2012), The Hague (2014) and Washington (2016) Nuclear Security Summits.

Mr. Mkrtchian started his diplomatic career in 1991 as Desk officer for Scandinavian and Baltic states at the European Department of the Foreign Ministry. Briefly, before being posted to Vienna, he was Desk officer for the UN and OSCE at the International Organisations Department.

Earlier Mr. Mkrtchian has been working at the State Historical Archives (1981-1986) and then at the Institute of History of the National Academy of Sciences (1986-1991).

Mr. Mkrtchian has participated in a number of international conferences and meetings of the UN, OSCE, EU, CoE, NATO and OPCW.

Mr. Mkrtchian graduated from the Yerevan State University in 1981 and did his postgraduate studies at the National Academy of Sciences from 1981 to 1984. He also attended the Diplomatic courses of Leeds University (UK) in 1993.

He is married with two children.